So far I have assembled many of the components and created an Arduino Flight Data Recorder to document the flight. The videos can be found here:

Future updates will be posted via the main web page and the YouTube channel. Hopefully we can stream or post the status live when it comes to launch day

FYI the project is actually coming along nicely. I am having some troubles currently with the GPS trackers and I think I will post a video about it for others to offer some insight. Basically at this stage- both my trackers are seemingly unreliable which is not cool at all

All part of the fun I guess.

Newest video is up covering some final assembly of the HAB payload module. 2 inches of snow here last night so launch this weekend is simply not going to happen

I wonder if NASA has all this fun...

Bummer on the weather. The payload is looking great though!

I've been watching a few launch/flight vids recently trying to figure out what I want to try to do this summer. A couple of observations and thoughts regarding tethering that may or may not have any basis in reality. You've probably already carefully considered each one of them but they aren't doing much good stuck in my head.

- Payload stability seems to increase with a) more attachment points and b) more distance between attachment point and center of payload gravity. Payloads that are just hung from a single eye hook or whatever in the middle of the lid have very chaotic motion with rapid yaw/pitch/rolling. Videos are nearly unwatchable. Two attachment points (e.g. handle straps) are better, but can still roll on the axis between the points where the straps grab the payload. Four attachment points (one on each corner) tend to be the best, with yaw and pitch of the payload somewhat constrained. (The whole rig still does a lot of swinging though). A couple of teams have created frames/hoops that the payload is tied to and then tether to those. These are probably the most stable.

- The pendulum effect of the entire system tends to slow down and be less jarring with longer distances between balloon and payload. However, the swinging seems to persist longer with fewer moments of complete stability. (This could just be environmental issues of course)

- The balloons sometimes have a very strong snapping effect (like a rubber band) when they pop...i think it depends on where they fail. The parts of the latex that doesn't shred off tends to wrap around downward and, if the chute and/or payload are too close, slam into and entagle with them. This is one of the longest tethers i've seen and it looks like there was minimal influence from the balloon when it burst: https://www.youtube.com/watch?v=5cRgBPqpJmA (launch 6:08 burst 12:00) Despite using a 'payload frame' this one has a lot of wobble, but it looks like they have very short lines connecting the payload to the chute tether. If they would have run individual lines from each corner to a couple of feet below the chute, i think it would have been more stable. Also keep in mind that whatever balloon is left is going to be hanging from the chute as well, so you'll want to keep that lead shorter to reduce the chance it hangs in front of the camera.

- I've experimented a bit with increasing moment of inertia (carbon rods with small weights at the end extended from the payload). It does seem to help with the herky jerky response but again more mass means more pendulum effect.

- I'm also thinking of adding a swivel to the tether to keep the payload from being twisted in circles by the balloon, haven't tried that yet.

- Question, do you have any idea what purpose those rings serve that you sometimes see along the tether line?

Whatever you do, check your tether before launch - https://www.youtube.com/watch?v=7dxdfh4OLAE lol
Top

Also just bumped into this on the internets - http://www.theregister.co.uk/Wrap/lohan/

Excellent observations. I have been thinking much along the same lines. Most of the HABs I see with long rigging lines tend to have way better results (and much easier to recover from trees). As well I talked with one Gentlemen who used a swivel as well and seemed pretty sure it helped greatly.

These are some great thoughts. I need to do a bit more work on the rigging before launch and now I have some time to kill waiting for the weather to improve. Thanks for sharing!

Dig around his sets, there are three different HAB projects, his '2017' project is using a brushless gimbal and using tons of carbon fiber: https://www.flickr.com/photos/91049302@N00/ 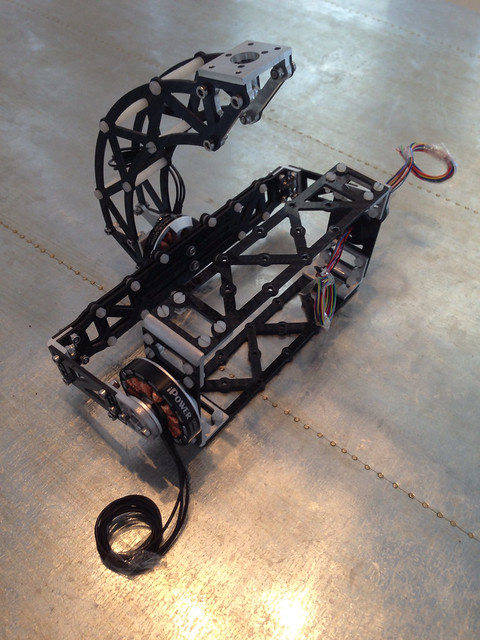 One of these days, lol.
Top

That is an AMAZING shot! Unbelievable that hobbyists are doing this. What a great time to be involved.

Hi Eric, i have been working on a super tight budget HAB project for a little while now, the idea is to send up a small Super Cheap camera, an arduino to do Pressure, temperature and humidity logging. anyway, i have been pursuing this project with as little outside knowledge as possible up until this point, and i have reached hurdle, Recovery. Up until this point i was going to use a GSM+GPS tracker unit to get the recovery location once it has reached the ground, but the problem being out here in rural Australia there is very poor phone signal out of towns, so i am just wondering if you know of and lite and cheap/diy radio modules/setups (that i can feed straight from my arduino) that should be able to constantly transmit the GPS locations from an onboard gps to ground, thanks!
-Levi
Top

I don't have much knowledge there. I have seen a few APRS modules for HAB projects but they were ridiculous expensive. I just used the Spot GPS which communicates directly with sats and doesnt rely on cell. Worked out okay for me besides a few minor hiccups (It went to sleep on takeoff but woke up on descent). Good luck!
I make videos and content on all things electronics, 3D printing and DIY
http://www.mkme.org
https://www.youtube.com/mkmeorg
Top
Post Reply
10 posts • Page 1 of 1